Usually folks wait 'til a prophet is dead before they turn him into their ventriloquist puppet.


We trust Dave.  I trust Dave.  But we have to be able to have more prophets than Dave.  We almost did.  Jeff Savage wrote some stuff and it almost got included in our scriptures.  I'll leave it for the readers to decide whether it was God's words or not. At any rate, the early Statement of Principles was rejected and the assignment was changed.  If our hearts were right it would have been a light thing.  It has not been a light thing, therefore our hearts must not have been right.

While the Answer and Covenant forbids Dave from participating in this process, he has refused to participate in the process going back as far as the June meeting at the Bartels' house.  If I might speculate on why, this blogpost might shed light on Dave's motivations:

It was easy for Joseph to make himself indispensable. It was tempting to do so. But he and the saints would have been better off had he refused to shoulder responsibilities that belonged to others. There are incidents along the way that can be identified as moments when Joseph could have seen a pattern emerging. One example was in November 1831 when a conference was convened to approve publication of the Book of Commandments. The book would need a preface. A committee was assigned to draft the preface. “[William] McLellin said that he, Sidney Rigdon, and Oliver Cowdery had been given the assignment to write the preface to the Book of Commandments, but when they presented their draft to the conference, the ‘Conference picked it all to pieces’ and requested that J[oseph] S[mith] petition the Lord for a preface. After J[oseph] S[mith] and the elders bowed in prayer, JS, who was ‘sitting by a window,’ dictated the preface ‘by the Spirit,’ while Rigdon served as scribe."(Joseph Smith Papers, Documents Vol. 2: July 1831-January 1833, p. 104.) He then dictated what has become D&C Section 1.

What if Joseph had refused? What if he told them God had a revelation, but the committee should receive it? What if Joseph insisted others perform their duties, rather than relieving them of their responsibility? Had he declined in November 1831, would the talk given in May 1842 have been necessary?

We are going to make mistakes, but we should not make the same ones. Sometimes the only way for people to become better acquainted with the Lord is for those who know Him to remain silent and allow others to go before Him in prayer for themselves. Why intervene to prevent others from gaining strength and experience for themselves?

Joseph handicapped the saints by taking too much of their responsibility on himself. The saints refused to let him alone and required him to be their answer-man. The best thing Joseph could have done would have been to keep riding when he crossed the Mississippi River with Hyrum. He should have headed to the Rocky Mountains. He didn't. The saints continued to depend on him. When he died, they were unable to call down a revelation for themselves. No one proposed to solve succession by revelation 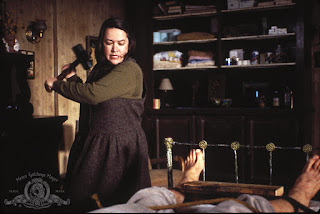 But Dave has refused to repeat the mistakes of the past by getting a revelation for us.

So, instead of Dave volunteering to write a statement of principles for us, we have conscripted him to write one for us against his will.  Not in the Misery sense of course, we aren't savages, but we've just decided that we will reuse reissue, repackage, reevaluate Dave's words to form our statement of principles. (I know, I know, I should have brought this up before the lots idea was voted on.) 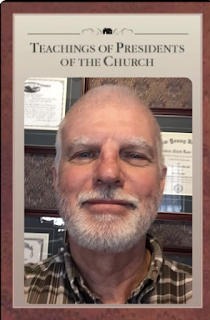 What we've done might be a first in the history of religion.  Usually people wait until a prophet is dead to repurpose his words.  But we've done it while Dave is still alive.  And if Dave told us not to, then he would be participating, and hence doing the strongman thing he's tried so strenuously to avoid.

In summary, even if we're doing the G&S wrong by making  Denver Snuffer participate in the process, if not in body but only in the use of his words, we can't expect Denver to tell us we're doing it wrong, because then he'd be participating.

And if Dave starts off his next talk with a rendition of Moon River, (no offense to Dr. Platt) it's because he's getting used to the sensation of a covenant people putting its collective hand up his ass to make him our ventriloquist puppet.

(As always, I claim no revelation in this matter and I could totally be wrong.  Also, I am not dissenting or disputing.  I'm just a jackass mocking.)