What I'm hoping to see in "The Last Jedi" 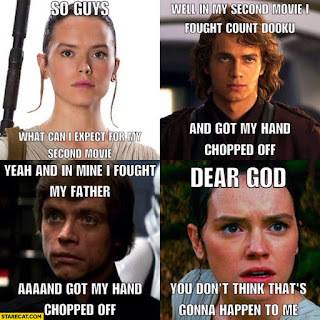 Note:  this post contains no spoilers for Episode 8: The Last Jedi, but will thoroughly discuss the other movies.  If you haven't heard that Vader is Luke's father, stop reading now.


I've been a Star Wars fan as long as I can remember, and, according to my mother, even longer than that. 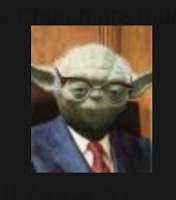 The diminutive Yoda was a dead ringer for noted shorty Spencer W. Kimball, and the Force was the priesthood power I really wanted to have.

In Luke, I saw his transformation from whiny kid to calm, confident Jedi who had no fear of death parallel that of Joseph Smith, long before I ever heard of Joseph Campbell or the Hero's Journey.

With the prequels...well, lets just say that I had to put some things on the shelf.

Even so, meesa thought there was still a lot to like in the prequels.  The Republic became an the Empire through a secret combination that would make Amalikiah proud.  Palpatine played both sides of a galactic civil war to create an Empire with himself as Emperor.

But one thing that bugged me was the Jedi Council.  There were so many Jedi, and they still couldn't see the dark side threat right in front of their faces, and when it was finally revealed, they couldn't deal with it.  They lacked the power of discernment that one might expect a prophet to have.

Maybe it was because they spent too much time worrying about ranks and hierarchies.  Maybe they thought they had a guarantee that they would have the foresight to see any possible Sith menace.

The Jedi had become, as Nibley described, "churchmen."


“Unlike prophets, churchmen are the product of institutions.  In the safety and permanence of institutions they put their trust.  They resolutely oppose the prophets whom they accuse of disturbing their repose and rocking the boat” (Nibley, The World and the Prophets, p. 175).

The Jedi Council had true Buddhist teachings about desire and attachment--"train yourself to let go of anything you fear to lose." 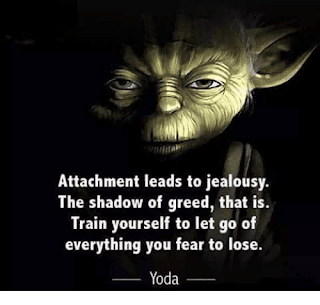 But they took this teaching and built a hedge around it:  they banned all attachments and romantic relationships because they might lead to jealousy.  Read log's post on hedging the law here. 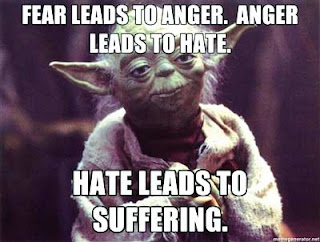 Another teaching that Yoda had right was about fear--

But the motivations behind hedging the law are, as far as I can tell, out of a fear of sin.   Fear of jealousy led to a Jedi Talmud of sorts--the traditions of men supplanting the revelations of God.

So what am I hoping to see out of The Last Jedi?  I hope Luke finds a restoration of the true teachings of the Force.  I have seen hints around the internet of something called "The Journal of the Whills". 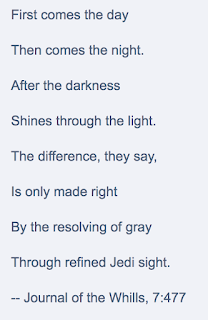 A snippet of Journal of the Whills appeared in the novelization of The Force Awakens.

The phrase "the resolving of gray through refined Jedi sight" feels reminiscent of Max Skousen's view of the Tree of Knowledge vs Tree of Life-- not believing that you have all the answers, and trusting in God's ability to save us.

In summary, what I'm hoping for in The Last Jedi, is that after the Jedi, will come something better than Jedi.