Contradictions: What if we're going about the GP all wrong?

God starts off this mortal world by leveraging a contradiction:  Multiply and Replenish the earth.  Don't eat the fruit of that tree.


God saves the earth by leveraging another contradiction:  The demands of Justice must be satisfied.  An infinite injustice (the murder of Jesus, robbing Him of an infinite lifespan) gives Jesus the means to satisfy the demands of justice and offer mercy to those who will accept it.

But that's not what I really want to talk about.  I want to talk about the GP clusterf**k.  If we had just accepted the original Savage version, this would've been over months ago and, I assume, we
would all be neighbors with Enoch today.

But the fruit was eaten too early (I don't blame you momma Eve--it was all part of the plan) and we now live in the darkest timeline.

In the darkest timeline, Jeff Savage, Denver (even the Servant David, blessed be his name), and the scripture committee were chatting and Jeff suggested that D&C 20 wasn't reliable and should be removed.  The Servant Dave (blessed be his name) suggested that it be replaced, and the committee stuck Jeff "I got excommunicated from the LDS Church for writing a statement of principles that wasn't even accepted" Savage with the job. Dave said that was a good idea, and Jeff should write it.  Jeff wrote it, people didn't like it, meetings happened, hearts were gladdened, votes were taken (see here for a recap). 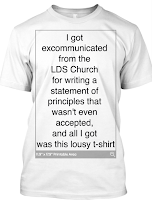 After this initial failure God added an onerous clause to the Answer and Covenant:

"But I require a statement of principles to be adopted by the mutual agreement of my people, for if you cannot do so you will be unable to accomplish other works that I will require at your hands."

In the darkest timeline, a vote was held, with 91% in favor.  It was decided that mutual agreement was to be defined as 100% acceptance (and those who decided so were probably right according to dictionary definitions).  And so most of us (87%) almost-mutually agreed to cast lots to select 7 souls to write a GP using only the words of scripture and The Servant David, even Denver Snuffer (blessed be his name).

As can be expected, mutual agreement has not been reached on the document produced by The Seven.  While no vote has been taken, at least one dissenter has stepped forward.  (As an aside, I think it would be a very bold and audacious statement to put forward the Doctrine of Christ and Sermon on the Mount as our GP that we hope to live by, but that's neither here or there).

Without mutual agreement, what then?  Should we continue to persuade others that our favorite GP should be the GP?  Alternatively, if we can't redefine "mutual agreement", maybe we can redefine "my people" to not include those who disagree?  Remove them from the body of Christ and the body is in agreement.

Alas, we have no High Sparrow to enforce the will of The Seven, and that's probably for the best.  So if we can't excommunicate the dissenters, then it's back to the mutual agreement by persuasion option.

The reality is, we've been set up.

The contradiction is this: mutual agreement is required, yet free will exists.  Barring Old Testament-style death cursings of, say, everyone who disagrees with me, we have been given an impossible task.  Not impossible (but really possible in the nothing is too hard for the Lord sense) but actually impossible (in the sense of God would cease to be God if he abrogated free will).


In Part 2 of this series I'll point the way forward to how we will resolve this contradiction and establish Zion. Unless someone else wants to write it.  I mean, I'm totally cool with nominating someone else to resolve the contradiction.  I don't want to hog all of the attention.