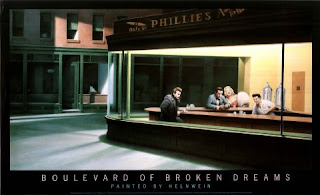 Last night I had a dream.(I did not have a dream, I'm making this up.)  I was in the spirit world.  I was having a conversation with people from all times, nations, and dispensations.

We each talked about our unique situations.

"I lived as a Nephite near the time of Jesus."  "I fought alongside Coriantmur."  "I was a pioneer who crossed the plains and settled Utah." said others.

Finally it was my turn.  "I lived in the days of Denver Snuffer," I said.

A hush fell over the crowd.

"Ummmm...I had a really cool iPhone.  I mean, I didn't have to break a covenant or anything to get it,  but it was still cool."

I woke up, really, really embarrassed.

I guess I'm willing to support the G&S.

It's not the one I would've written.  It's not even in my top 3 preferred G&S versions.  Although I hesitate to accuse any of blasphemy, Shalyce's words voicing God don't ring true to me.

But I have little faith in the ability of the group to mutually agree on anything else.  I really hope that God doesn't interpret the phrase "mutual agreement" to mean 100% of covenant takers.  If it does mean 100% then I don't like our chances.

I don't like the idea that 100% is obtained by removing any non-supporters from the covenant body.

I don't know how we get to Zion from here.  But I remain hopeful, believing that Christ has accomplished harder things.  I ask Him to have mercy on us.