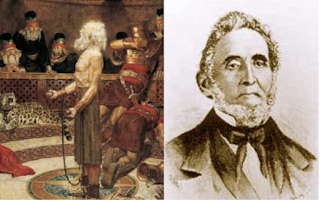 And it shall come to pass that except they repent I will utterly destroy them from off the face of the earth; yet they shall leave a record behind them, and I will preserve them for other nations which shall possess the land; yea, even this will I do that I may discover the abominations of this people to other nations. And many things did Abinadi prophesy against this people.
One cause of our heavy persecutions, is the influence which those have in the world, whom we have separated from the fellowship of the church for their wickedness; who attempted to gratify their vengeance on us, and also to hide their own shame, by foul slanders and base calumny. We were at one time represented by them, as having all things common: at another as being enemies to the government: and in other places we were reported to be abolitionists, and indeed any thing, they thought best calculated to stir up the public mind, and to excite popular indignation; and if possible, put an end to the work, by sacrificing some of those who were considered as most active in supporting and defending the cause. But through the mercy of God, we are still in existence, and have the opportunity of joining with you in the privileges of this day.

Our cheeks have been given to the smiters, and our heads to those who have plucked off the hair. We have not only when smitten on one cheek turned the other, but we have done it, again and again, until we are wearied of being smitten, and tired of being trampled upon. We have proved the world with kindness; we have suffered their abuse without cause, with patience, and have endured without resentment, until this day, and still their persecutions and violence does not cease. But from this day and this hour, we will suffer it no more.

We take God and all the holy angels to witness this day, that we warn all men in the name of Jesus Christ, to come on us no more forever, for from this hour, we will bear it no more, our rights shall no more be trampled on with impunity. The man or the set of men, who attempts it, does it at the expense of their lives. And that mob that comes on us to disturb us; it shall be between us and them a war of extermination, for we will follow them, till the last drop of their blood is spilled, or else they will have to exterminate us: for we will carry the seal of war to their own houses, and their own families, and one party or the other shall be utterly destroyed.

On the left, we have Abinadi, and on the right we have Sidney Rigdon.  Both were preaching hellfire & damnation to a wicked generation.  Abinadi did so by God's request.  Sidney did so on his own errand.

Abinadi's words, while they got Abinadi burned, lit a fire in the heart of Alma and created a movement that swept the Nephite nation.  Sidney's words enflamed the hearts of the Missourians with anger to burn the homes of many saints.

While the duty is upon us to warn our neighbor, it is not our duty to poke the beast. Warn your neighbor one on one as the Spirit suggests.  If God asks us to publicly recite the abominations of LDSCorp, then, of course we should do so.  But your friends and family are less likely to listen to you after you get excommunicated. Provoking a billion dollar church with its own semi-secret police will likely turn out badly, nor will it bring Zion.  My uneducated opinion is that Zion gets established quietly, gathered by angels.  The LDSCorp should worry about John Dehlin more than it should worry about the remnant.

Be charitable and patient and labor to reach others. They will judge you harshly, but nevertheless be kind to them. They are going to grow to fear you, but that’s only part of how darkness responds to light. Give them no reason to fear you. The time will come for us to gather, but between now and then, be leaven. Preserve the world. Be salt. Preserve the world, even if it hates you. 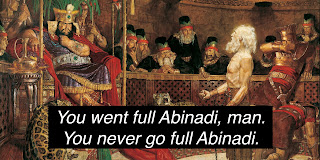 Never go Full Abinadi (unless God asks you to).

Don't gladly anticipate the destruction of the wicked.  Make intercession for them.  Love your enemies, or you might share their fate.